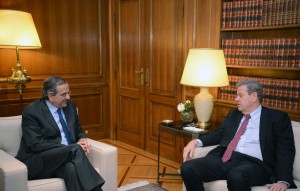 The number of TUI’s customers visiting Greece this year increased by 10 percent, according to Peter Long, the CEO of TUI Travel PLC, one of Europe’s biggest tour operators.

Mr. Long made the statement following a meeting with Greek Prime Minister Antonis Samaras and Tourism Minister Olga Kefalogianni on 22 October in Athens to discuss the prospects for further strengthening tourism arrivals in Greece.

“I believe that the political stability the government has succeeded is very important as the country’s economy is now on a very strong and positive development course, which is very significant for tourism,” Mr. Long said after the meeting.

He added that TUI has a very close cooperation with the Greek Tourism Minister and the company sees potential for further development in Greece.

“We hope to increase the number of our customers in Greece by 10 percent in 2015 as well,” Mr. Long said.

Greece must invest in tourism

On the same day, Mr. Long addressed the 13th Tourism & Development Conference of the Greek Tourism Confederation (SETE) and referred to the need of joint tourism investments. 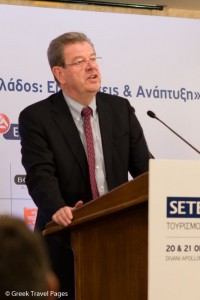 “We have expressed to your government our intentions to further invest in Greece,” TUI Travel’s head told the audience of Greece’s tourism proffesionals.

One of TUI’s concerns in regards to Greece are the country’s airports, which are in need of improvements and modernization. “If we want to succeed in extending the tourist season, it is necessary for flights to begin earlier and this is one of the three key points for TUI’s further development in Greece,” he said.

Another key point is to explore the possibility of new investments in destinations that right now lack hotel complexes.

Furthermore, a necessary prerequisite for extending the tourism season is for Greek hotels to provide full holiday travel packages during the off season months.