Greek PM: Tourism Will Receive Half A Billion Euros For Investments Per Year 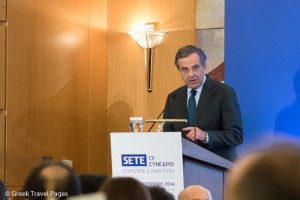 Greek tourism will receive 500 million euros per year for investments in the form of European Union subsidies, according to an announcement made by Prime Minister Antonis Samaras during the 13th Tourism & Development Conference of the Greek Tourism Confederation (SETE) on 21 October in Athens.

The Greek PM added that efforts are in process to overcome an EU directive (651) that is hampering the subsidization of major hotel investments in developed regions of the country.

Tourism is the locomotive for a return to growth

“Tourism can be the locomotive for us to exit the crisis and enter development, but it can also be the catalyst for the development of many other industries,” the prime minister said.

He added that Greece can develop and evolve into a unique island tourism destination by developing sub-sectors, such as medical and religious tourism.

“With a 20 percent contribution in GDP and breaking one record after another, Greek tourism has been upgraded in quality compared to the past in relation to the competition,” Mr. Samaras said.

The PM also noted that political stability is a necessary condition for tourism to go well in 2015.

At this point, Mr. Samaras condemned those who have made attempts to stand in the way of the government’s efforts to develop the tourism sector.

“There are some who react and we found them across us when we abolished cabotage (liberalization of cruise tourism) and even heard them suggest to eliminate SETE as a social partner (to the government),” he said.