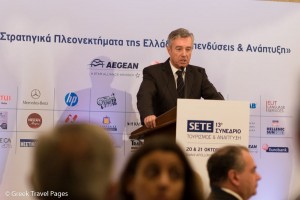 Tourism revenue in Greece is expected to eventually reach 14 billion euros this year, up from a previous forecast of 13.5 billion euros, according to the president of the Greek Tourism Confederation (SETE), Andreas Andreadis.

“This year Greek tourism has contributed 14 billion euros in direct revenues, and along with air and maritime transport and domestic tourism this figure has reached 17.1 billion euros as a direct result,” Mr. Andreadis said on the second day of SETE’s 13th Tourism & Development Conference in Athens on 21 October.

According to SETE’s president, the direct and indirect contribution of Greek tourism to the real economy stands at 20.5 percent of GDP or 37.6 billion euros, based on a 2.2 multiplier that IOBE research institute had estimated in 2012.

He also said that the average per capita expenditure per visitor rose to 75 euros from 68 euros in 2010.

However, Mr. Andreadis said that more needs to be done for Greece and referred to awaited tourism investments, airport privatization, the addition of new air routes to more destinations in Greece and support to coastal shipping.

Greece: 2015 Could Be The Year For Significant Tourism Investment

Greek PM: Tourism Will Receive Half A Billion Euros For Investments Per Year