A new survey by YouGov international market research agency has revealed that 37 percent of Britons think the classical Greek sculptures should be returned to their country of origin.

Thirty-six percent say one of the best arguments for returning the sculptures is that they “are one work of art, and they should be reunited along with the rest of the Parthenon sculptures in Greece.” While the British Museum houses many of the sculptures from the Parthenon, others can be found around the world in places like Paris and Copenhagen.

Another 34 percent are swayed by the argument that the sculptures belong in Greece due to their importance as a part of Greek cultural heritage. 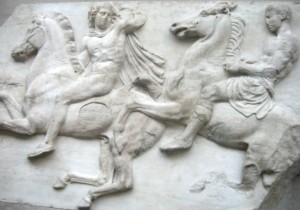 Only nine percent think it’s a good argument that Britain should be able to keep the Marbles – even if they were taken illegally – just because they were taken 200 years ago.

The poll was conducted 16-17 October during the visit of British-Lebanese barrister Amal Alamuddin Clooney in Athens where she held meetings with Greek Prime Minister Antonis Samaras and members of the government.

In total, 1,966 UK citizens participated in the survey.