Greece: 2015 Could Be The Year For Significant Tourism Investment 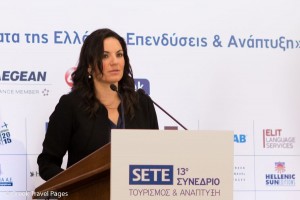 New growth areas in Greece are expected to emerge from a number of important investments that are underway in many of the country’s regions, according to Greek Tourism Minister Olga Kefalogianni.

Speaking during the 13th Tourism & Development Conference of the Greek Tourism Confederation (SETE) held in Athens on 20 October, Mrs. Kefalogianni said that 2015 could develop into a year of significant tourism investment for Greece.

“All indications show us that 2015 will be a very good year, not only in terms of arrivals and revenue, but also in the field of tourism investment,” she told the audience of Greek tourism professionals.

During her speech, the tourism minister listed the goals set for the next period, which include increasing the tourism surplus in the real economy, giving further impetus to special interest tourism types, designing a new policy for cruise, better distributing the tourist flow all year round and putting other areas and regions in the “tourism game” to give opportunities for income and jobs.

She stressed that a prerequisite for the achievement of the above-mentioned objectives is political stability, along with social peace and the continuation of reforms as they are “necessary conditions to bring the planned investments.”

Mrs. Kefalogianni noted that “nothing can grow in an environment of instability, uncertainty and misunderstanding.”

In addition, the tourism minister noted that the upgrading of Greek tourism and the desired results would come through the cooperation of the Tourism Ministry, the country’s regions and the private sector.

“The regions must realize that a common strategy is needed at all levels,” she said.

According to the minister, as far as the country’s promotion is concerned, the Greek National Tourism Organization will play a decisive role in coordinating the regions so a clear and common message about Greek tourism would be sent out to the world.