Amphipolis Mosaic Depicts Greek Myth Of The Abduction Of Persephone 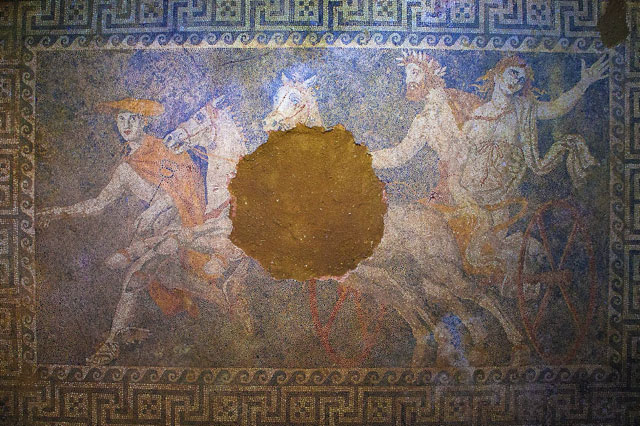 The mosaic floor, recently discovered during the excavation of the large burial mound in Amphipolis, northern Greece, has been revealed in its entirety. 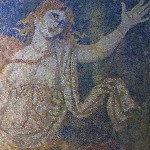 On 16 October, with the last layer of soil removed from the east side of the mosaic, a third character was revealed, behind the bearded man, who apart from a golden wreath on his head is also seen wearing a red robe.

The third character is a woman with waving red curls, wearing a white tunic and with a piece of jewelry on her left wrist.

“It is obvious that this is the mythological representation of the Abduction of Persephone (daughter of Zeus and Dimitra) by Pluto (the Lord of the Underworld) with the God Hermes in the role of a psychopomp,” an announcement by the Greek Culture Ministry said. 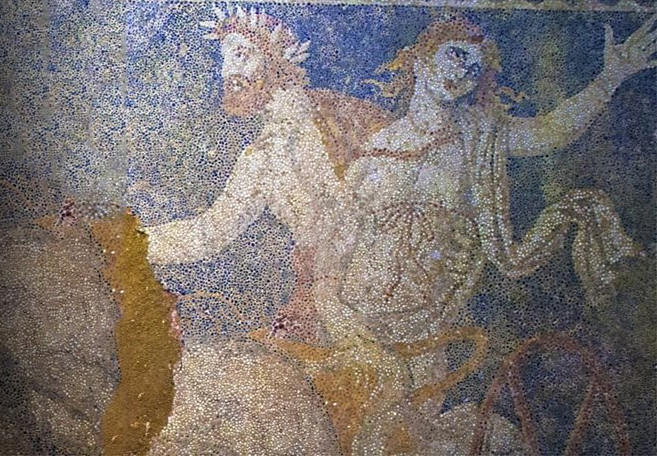 The ministry noted that the mosaic is an “amazing representation not only because of the many colors used, but also because of its perfect design.”

The ministry added that the depiction of the abduction of Persephone in the mosaic floor directly links the Amphipolis tomb to the renowned Tomb of Persephone in Vergina, Greece, where a mural representing the same scene was discovered.

The mosaic floor decorates the entire surface of the second chamber, a 4.5m width by 3 m length area, and is made of small white, black, grey, blue, red and yellow pebbles.

Take A 3D Virtual Tour Of The Amphipolis Tomb