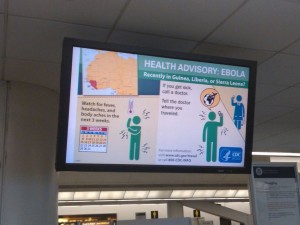 Greece will take precautionary measures to prevent the spread of the deadly Ebola virus in the country, it was decided during an emergency meeting held on 10 October between Health Ministry officials, experts from Hellenic Center for Disease Control and Prevention (KEELPNO) and the National Health Operations Center (EKEPY).

According to announcements, Greece’s entry points will be staffed with 30 specially trained KEELPNO medical specialists in order to detect any suspicious incidents.

Furthermore, in order for experts to filter out high-risk cases, airline companies will distribute questionnaires to visitors traveling from West African countries (via direct flights or transit).

However, the use of thermal cameras at airports to identify febrile travelers was deemed unnessesary.

This photo provided by the CDC shows an ebola Virus. (AP Photo/CDC)

Greek and English language posters have already been placed in Greek airports providing information about the Ebola virus.

In addition, the Amalia Fleming hospital in Athens has been put on standby to take in any suspicious Ebola cases and a committee in the Greek Health Ministry will be established to closely monitor the issue.

When speaking to the Greek press, the general secretary of public health, Christina Papanikolaou, noted that there is no reason to be particularly worried about Ebola in Greece “if we are well prepared.”

So far there have been no cases of Ebola reported in Greece. KEELPNO has issued a warning against travel in Liberia, Guinea, Sierra Leone and Nigeria.