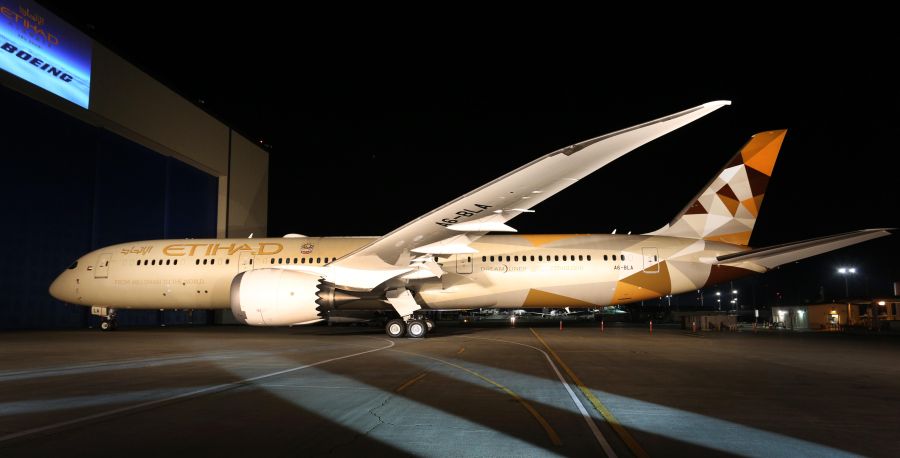 Etihad Airways celebrates the rollout of its first Boeing 787-9 painted in the airline’s stunning new “Facets of Abu Dhabi’ livery.

Etihad Airways and Boeing celebrated the roll out of the airline’s first 787-9 Dreamliner at an overnight event held recently in Seattle, Washington, USA. 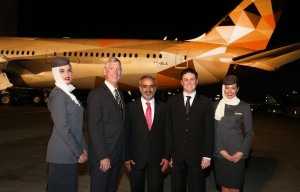 James Hogan, president and chief executive officer of Etihad Airways Aviation Group, said the airline was proud to be one of the world’s largest customers for the B787 Dreamliner.

Etihad Airways’ first Boeing 787-9 will be delivered in December 2014, and more than 40 international routes have been identified for future operation by the airline’s Dreamliners. The aircraft will initially operate between Abu Dhabi and Düsseldorf and between Abu Dhabi and Doha. Services to Brisbane, Mumbai, Moscow and Washington D.C. will follow in the first half of 2015.

“Our new fleet of B787s will set customer service expectations for the airline industry, delivering the highest levels of comfort and choice across all classes of service,” Mr. Hogan added.

The new “Facets of Abu Dhabi” livery uses a color palette that reflects the varying hues of the landscape of the UAE, from the darker sands of the Liwa desert to the lighter colors seen in the Northern Emirates. The result of extensive research, the design will also be a key feature of the new cabin interiors being introduced on Etihad Airways’ Boeing 787 aircraft.

Etihad Airways has also revamped its product offering on the B787 based on extensive consumer research, with refinements in all three cabins.