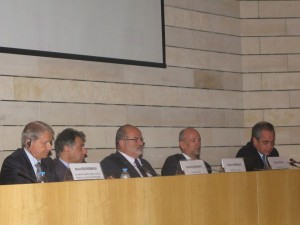 (From left) Horst Reichenbach, head of the European Commission’s Task Force for Greece, with the social partners, active in the representation of Greek SMEs and key interlocutors of the Greek government in policy-making: Vassilis Korkidis, president of ESEE; Giorgos Kavvathas, president of GSEVEE; Yiannis Retsos, vice president of SETE; and Konstantinos Michalos, president of UHC. Photo: GTP

As social partner to the Greek government in policy-making, the Association of Greek Tourism Enterprises (SETE) has made a series of proposals for the creation of a national strategy for small and medium-sized tourism enterprises in Greece.

These proposals are included in a Policy Document, a joint contribution of the social partners representing the SMEs in Greece, the Union of Hellenic Chambers of Commerce and the European Commission’s Task Force for Greece, announced recently in Athens. The policy document formulates proposals and determines specific policy measures in order to tackle the problems of the country’s SMEs.

According to SETE’s vice president, Yiannis Retsos, SMEs are the businesses that will totally support the strategic plan for Greek tourism (2021 Growth Roadmap) that SETE has filed as a social partner of the Greek government to place the country within the top 10 tourist destinations in the world.

By 2021, SETE aims for Greece to exceed 24 million international visitors, which would generate direct annual revenue of 18-19 billion euros and create 300,000 new jobs.

“It is wrong to believe that revenue from Greek tourism is generated only by large enterprises,” Mr. Retsos said during the policy document’s presentation. He pointed out that 94 percent of Greek accommodation units have a capacity of less than 50 rooms.

Proposals for the development of Greek tourism SMEs 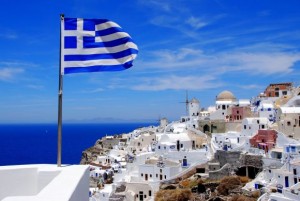 SETE’s proposals for the development of Greek SME’s are based on the application of horizontal policies to infrastructure-procedures, development law and transport and include:

– Amending legislation in order to facilitate the creation of tourist ports.
– The Greek State should hire more employees to accelerate the procedure of issuing visas and proceed with issuing multiple electronic visas.
– VAT in catering should remain at 13 percent or even be reduced, since any increase would burden businesses.
– Utilization of archaeological sites by changing-expanding the opening hours, electronic ticket vending machines and electronic guided tours in all museums and archaeological sites.
– “Social contract” between all social partners and the State so as not to interrupt the continuity of the tourist services chain between April-October each year, i.e. in airports, airlines, ships, buses, metro, taxis, hotels, tour operators, museums, archaeological sites.
– All areas of the country should fall under the subsidy scheme for investments regarding upgrading and modernization of all types of accommodation (hotels and rented rooms) but also for investments in special forms of tourism and as a supplement to existing facilities.
– Particular attention should be paid to subsidies, not forgetting the importance of tax exemptions, which should be particularly attractive for the companies that are still profitable.
– To have specific provision for Health tourism within hotel complexes in accordance to the standards that will be issued by the Greek National Tourism Organization and Health Ministry.
-The restoration of competitiveness in pricing policy of the country’s largest airport in Athens, which had in the past the largest decline in passenger traffic, should go forward immediately.
-The grouping of airports for privatization should not create hazardous geographical exclusivities. For example the two largest airports of Crete (Heraklion and Chania) should not belong to the same group.

The policy document also includes SETE’s proposals to remove obstables for enhancing the quality and competitiveness of the Greek touristic entrepreneurship:

– Further reduction by 50 percent of the number of supporting documents required for the operating license of an establishment.
– Completion of the special spatial planning for tourism, incentives for investments of high quality and efficiency. Reduction of the construction distance from the coastal line at 30 meters, the same for residences and industries.
– Immediate lifting of the monopoly of the KTEL bus companies and not just by 2015. Full liberalisation of land passenger transport with public-use vehicles, through the creation of many new SMEs.
– Reduction of the real estate tax.

SETE also proposes the continuous training and linking of tourism businesses with business internship and apprenticeship programs, which will be linked with the tourism labor market.