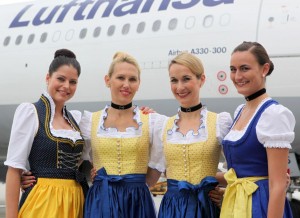 Once again this year the Munich-based Lufthansa crews will take off in traditional folk costume during Oktoberfest, the famous beer festival and one of the largest in the world. The special “Oktoberfest crew” on board will depart for São Paulo on 24 September and for Mexico City on 4 October.

Lufthansa crew wearing traditional Bavarian attire will also – for the first time – take off from Munich on selected European flights.

To mark the beginning and the end of Munich’s Oktoberfest, a Lufthansa CityLine crew will also be swapping their uniforms for dirndls. These flights will depart from Munich on 20 September for Lyon and Copenhagen, and on 21 September for Zagreb and Bremen. On 5 October, the traditionally dressed crew will fly from Munich to Zadar (Croatia) and Geneva.

The folk costume worn by Lufthansa’s customer service staff at Munich Airport has a new design this year. During the Oktoberfest, station staff can also wear the new folk costume instead of their Lufthansa uniforms.

Lufthansa’s passenger lounges in Munich will also be getting into the spirit of the “fifth season” during Oktoberfest. In the Senator Lounges, passengers will be able to enjoy apple strudel, meat and cheese boards, and pretzels. The First Class Lounge will be offering Bavarian delicacies in its Oktoberfest-themed restaurant. Specialties such as duck and Kaiserschmarrn (shredded pancake) will be freshly prepared by the chefs.