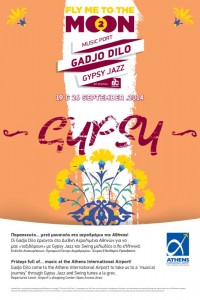 Through the inspiration of renowned gypsy jazz guitarist Django Reinhardt and the Greek rembetiko and folk tunes of older decades, Gadjo Dilo will experiment by blending the different musical traditions. The result is expected to be a live performance full of rhythm and uplifting melodies.

The airport event is part of the Fly me to the Moon/Musicport project, an Athens Airport cooperation with the culture platform ελculture.

Gadjo Dilo will perform 13:30 – 14:30 at the airport’s shopping center (public access area). The band will also perform again at the airport on Friday 26 September. 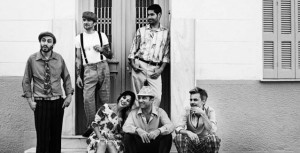 Gadjo Dilo is a unique band created with the sole purpose of reanimating the Manouche gypsy jazz musical tradition. Their source of inspiration is the great gypsy jazz guitarist Django Reinhardt, characterized by all great jazz musicians – without exception- as a genius.

Their debut album, entitled “Manouche de grec,” reflects their love for Django, as well as for older Greek songs of the same era. Manouche de Grec is a collection of 10 cover songs with the band’s most beloved Greek songs finely blended with the sounds and flavors of gypsy jazz.