Aris Spiliotopoulos Takes On Tourism Issues In The Municipality Of Athens 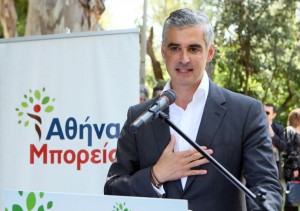 Aris Spiliotopoulos, head of municipal party Athina Boreis (Athens, you can do it) and city councillor, has been appointed by Athens Mayor Giorgos Kaminis as the Executive Advisor for the Tourism Promotion of Athens. Mr. Spiliotopoulos was the main rival of Mr. Kaminis in May’s local elections.

According to Mayor Kaminis, the effort for Athens to become established as a modern European capital requires a new mindset, one that will “disregard past differences, overcome the concept of winners and losers and start fresh. To work together for the benefit of Athens.”

Aris Spiliotopoulos served as party spokesman for New Democracy under then main opposition leader Kostas Karamanlis until the 2000 general elections. Later, he served as minister of tourism (2007-2009) and then of education in the Karamanlis government.