Qatar Airways Takes Delivery Of Its First Airbus A380

Qatar Airways recently took delivery of its highly anticipated first A380. With 10 Airbus A380-800s on order, Qatar Airways is preparing to take delivery of four of them before the end of this year. 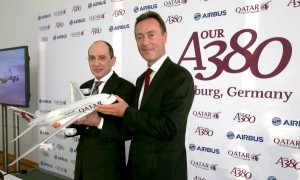 “The A380 that we are introducing is not just any A380; we have completely designed every element, giving it a signature touch that has never been seen before on board,” said Group Chief Executive, His Excellency Mr. Akbar Al Baker at a recent press conference at the Airbus Factory in Hamburg, Germany.

He added that the newly opened Hamad International Airport, the airline’s hub in Doha, has been specifically created with the A380 in mind, with five contact gates dedicated only for this aircraft, making the experience smooth and effortless for passengers.

The airline will first introduce A380 services on one of its frequencies on the Doha – London route from October, followed by Paris Charles De Gaulle shortly thereafter.

The 517-seat aircraft is spread across twin decks in a tri-class configuration of 8 seats in First Class; 48 seats in Business Class and 461 in Economy Class.

Economy Class passengers benefit from the most spacious A380 arrangement flying in the skies, with a pitch of 32 inches spread in a ten-seats-across layout.

The airline currently operates a mixed fleet of the Airbus family of aircraft, a large contingent being the single-aisle A320s and also a mixed range of A330s and A340s.

In the last quarter of 2014, it is expected that the airline will start receiving its first A350 XWB aircraft as the world’s launch customer.

Ryanair To Fly To Nine Destinations From Athens In Summer 2015