Athens, Greece, To Get Bicycle Lane 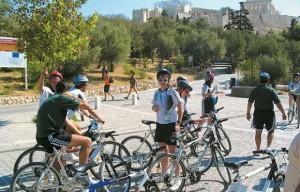 By the end of 2015, a 27-kilometer bicycle lane should be running through the streets of Athens, according to a recent announcement by Greek Environment Minister Yiannis Maniatis and Athens Mayor Giorgos Kaminis.

During an event held in Athens on 16 September to mark European Mobility Week, the environment minister said the bicycle lane will start from the northern suburb of Kifissia, pass through the city center and end in Faliro in southern Athens.

The first phase of the bicycle lane will start with the construction of an 11-kilometer section between Gazi and Faliro. A contract has already been signed for the creation of the Gazi-Faliro section under a budget of 2.2 million euros. 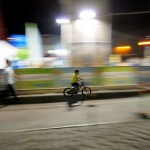 A tender is expected to launch soon to find a contractor for the creation of the bicycle lane’s northern section that will connect Gazi to Kifissia. The northern section has been estimated to cost nine million euros.

“We are giving a tough fight to win back public spaces,” Mayor Kaminis said. The mayor added that efforts will be made to find space in the city for the creation of bike stands.

He also underlined the need to tackle illegal parking and improve the quality of streets in Athens.

Like every year, the 5th Athens Bike Festival will be organized during the European Mobility Week – an awareness raising campaign aiming at sensibilising citizens to the use of public transport, cycling, walking and at encouraging European cities to promote these modes of transport.

The 5th Athens Bike Festival will take place 19-21 September at the City of Athens “Technopolis” multipurpose cultural space in Gazi.

The Guardian Highlights The Best Of Athens, Greece, In New City Guide