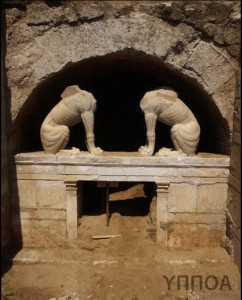 Greek archaeologists excavating a large tomb in Ancient Amphipolis, in central Macedonia, Greece, have informed the Greek Culture Ministry on their recent finds that involve the decoration details of the monument.

According to an announcement by the ministry, 10 more stones that formed part of the seventh and eighth row of the sealing wall were removed with three more remaining of the 11-row stone wall. Their removal revealed another part of the entrance to the tomb, bearing decoration similar to the one seen on the side walls: a white colored fresco that mimics the marble enclosure (photo 1).

Also, under the Ionic capitals, the marble pilastres of the gateway have been revealed, covered in white fresco (photo 2).

By partially removing debris behind the entrance, the back side has been also revealed, demonstrating a similar degree of care in its construction, corresponding to the one seen on the front side. 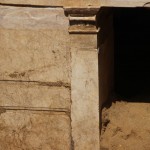 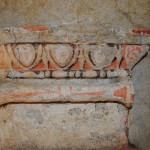 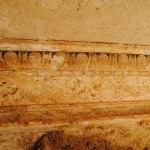 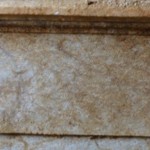 Traces of red and black are still surviving on its architrave’s frescoes, while the side and back view of the ionic capitals has been now revealed as showing frescoes in the same colors (photos 3 and 4).

In addition, the antechamber’s side walls, covered with Thassos marble and topped with ionic architrave have been revealed. Traces of black and red color still survive on the architrave’s Ionic cymation (photo 5).

These discoveries follow the uncovering of the entrance to a late 4th Century tomb guarded by two headless sphinxes and other decorative details of the monument.

Looking Inside The Tomb In Ancient Amphipolis, Greece