19 Million Tourists Are Expected In Greece This Year 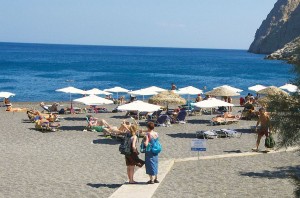 The 2014 arrival forecast for Greece is still set at 19 million tourists, despite a drop in arrivals of Russian and Ukrainian visitors, the Association of Greek Tourism Enterprises (SETE) said in an announcement on 12 August.

SETE came to this conclusion after processing international arrival figures for the first seven months of the year. According to the data, international arrivals at Greece’s major airports during the January-July 2014 period were up by 16.5 percent compared with the same period in 2013.

Overall, some 8.1 million arrivals were recorded in Greece during the first seven months of the year.

The “champions” of the January-July period were Athens, Chania, Mykonos, Santorini and Kalamata as arrivals to the airports of those destinations were up by 31 percent, 22.9 percent, 39.9 percent, 26.7 percent and 62.5 percent respectively.

On Athens, SETE commented that the Greek capital was continuing its impressive recovery, considering the rise in arrivals during the first seven months of the year, as well as in July alone (25 percent increase).

However, the association commented that Heraklion Airport seems to have reached its capacity limits. The airport in Crete saw an increase of only 2.7 percent in July, compared to the same month last year. “There is concern for the coming years, given that a bidder for the construction of the new airport in Kasteli has yet to be found and the necessary short-term improvements to the current airport have still not been carried out,” SETE said.