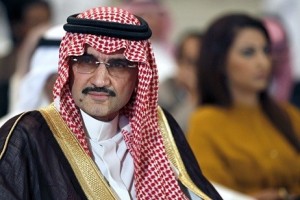 One of the world’s most high-profile investors and richest men, Prince Alwaleed bin Talal, arrived in Crete, Greece, on 9 August to spend a week-long vacation in Elounda. The Saudi Arabian tycoon is one of the major shareholders of Four Seasons and considered one of the most influential people in the world.

According to reports, the arrival of Prince Alwaleed in Greece  is considered of high importance as the Saudi tycoon has expressed interest in investing in the country, as well as taking over the management of the Asteras hotel complex in Vouliagmeni.

“Our executives at Four Seasons are already in serious contacts and discussions in order for us to manage the two hotels of Asteras,” the Arab tycoon said during the recent Economist Conference on “Europe and the Arab World” held in Athens.

Apart from the management of Asteras, Prince Alwaleed has also shown an interest for the Grand Resort Lagonissi.

Greek Tourism Minister Olga Kefalogianni had met with Prince Alwaleed during an official visit to Saudi Arabia in February. She met with the Saudi tycoon again in May with Greek Prime Minister Antonis Samaras and Deputy Development Minister Notis Mitarakis on the sidelines of the Economist conference in Athens.

Prince Alwaleed bin Talal owns a broad swath of stakes in private and public companies in the U.S., Europe and the Middle East, mostly through Kingdom Holding Co. Holdings include stakes in News Corp, Citigroup, hotel management companies Four Seasons Hotels & Resorts, Movenpick Hotels & Resorts and Fairmont Raffles Holding, as well as hotel real estate such as the Hotel George V in Paris and a stake in the Savoy Hotel in London.