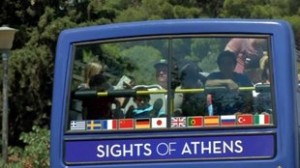 “Greece Returns as Tourist Hotspot” is the title of a recent video report from Athens by Reuters that highlights the recovery of Greek tourism after the crisis period. The report has been reproduced in US media such as the New York Times and the Boston Globe.

“Historic landmarks and glorious sunshine have long made it a favorite holiday destination… Now as the country emerges from the crisis, visitors numbers are set to soar,” according to the Reuters report, which also includes statements by the president of the Association of Greek Tourism Enterprises (SETE), Andreas Andreadis.

“Greece is in fashion again, that is good news. I hear from everywhere,”Mr. Andreadis said.

According to SETE’s president, after six consecutive years of recession, the Greek economy is set to grow again at 0.6 percent.

The report also includes two opinions of tourists in Greece who refer to hotels of “decent value “ and restaurants of “excellent value.” On the economic crisis, the tourists said that “this is nothing to do with the people.”

Tom Hanks And Rita Wilson Get Sporty In The Cyclades