UNWTO has opened the call for applications for the 11th edition of the UNWTO Awards for Excellence and Innovation in Tourism.

The Awards recognize innovative tourism initiatives and contributions to the sector, in line with the principles of the Global Code of Ethics for Tourism. Since its inception in 2003, the UNWTO Awards have acknowledged more than 70 scholars, visionaries and institutions, from the public and private sectors, as well as NGOs. 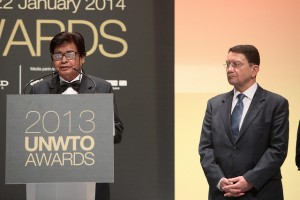 Dr. Tej Vir Singh was awarded the 2013 UNWTO Ulysses Prize for Excellence in the Creation and Dissemination of Knowledge. Photo © UNWTO

Last year, Dr. Tej Vir Singh, a scholar with lifelong dedication to tourism education and research, was awarded the Prize for Excellence in the Creation and Dissemination of Knowledge and journalist Richard Quest with the Award for Lifetime Achievement.

Both have contributed to inspire competitive and sustainable tourism development, be it through academic research or reporting.

The Award Ceremony will be held during the Madrid International Tourism Trade Fair FITUR in Spain on 28 January 2015.

For the second consecutive year, the UNWTO Awards ceremony will be co-hosted by UNWTO and IFEMA|FITUR. The day before the ceremony, the UNWTO Awards Symposium will highlight the importance of innovation in tourism and share the knowledge and achievements of UNWTO Awards finalists.

For information on the UNWTO Awards, press here.

Greece’s Epidaurus Included Among The World’s Most Fascinating Amphitheaters