Greece’s Epidaurus Included Among The World’s Most Fascinating Amphitheaters 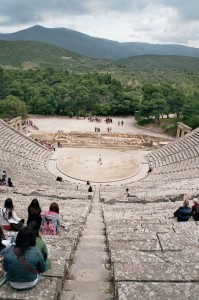 Set against a backdrop of lush landscape, the theater of Epidaurus is marveled for its exceptional acoustics Photo: © Wikimedia Commons

Travel news site Travel Pulse has included the Epidaurus in Greece among the most amazing ancient amphitheaters.

“The first thing you’ll want to do here is hear your voice echo amid the Amphitheater at Epidaurus’ amazing acoustics, which is what it is proudly known for,” Travel Pulse noted.

The Epidaurus is one of Greece’s well-preserved sites, especially since it remained out of sight for centuries.

“Differentiating from its other Roman counterparts, it acted as a religious center in honor of the god of healing, Asklepios. Nevertheless, the Amphitheater at Epidaurus is still quite the attraction, with such exquisite audibility, even when there’s a packed house during a show, the sounds bouncing off its walls are as clear as a bell,” Travel Pulse added.

For more on Epidaurus, press here.