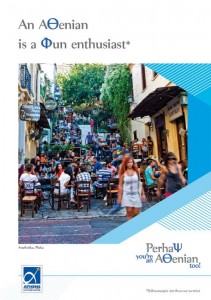 In the framework of the City Pair campaign Perhaψ you’re an Aθenian too, launched by Athens International Aiport (AIA), the Greek capital is “hosted” at eight airports in Russia. The campaign aims to enhance Athens’ appeal and attract travelers to visit the city and experience its beauties for themselves.

The campaign’s slogan and creatives have been translated in the Russian language using the letters of the Greek alphabet as well as international words of Greek origin.

The City Pair campaign was launched by Athens International Airport (AIA) over six months ago in 18 international airports that have annual passenger traffic of some 170 million.

According to AIA, given the dynamic of the specific market, the enhancement of Athens’ popularity and attractiveness among international destinations through the City Pair campaign platform is particularly important.

The campaign is held under the auspices of the Greek Tourism Ministry and the Greek National Tourism Organization (GNTO).

To see the campaign in Germany, press here.