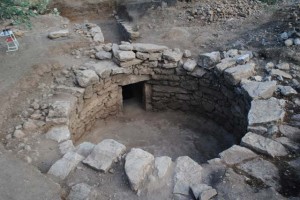 A Mycenaean vaulted tomb has been discovered near Amfissa, central Greece, during an excavation project, the Greek Culture Ministry recently announced.

The tomb has the features of similar monuments of this type as it is nine meters long, has a deep vestibule and a circular that has a maximum internal diameter of 5.9 meters. The superstructure of the dome has collapsed but the walls of the chamber have been maintained at a height of some three meters.

According to the ministry, the tomb has not been looted and the offerings found on the ground date its use from the 14th until the end of the 12th centuries BC.

Among the discoveries, of particular interest are the 44 vases with painted decoration, two bronze vases, gold rings, two bronze daggers, female and zoomorphic figurines and many sealstones with animal, plant and linear motifs.

The culture ministry considers the vaulted tomb of Amfissa a unique find, since it is the first of its kind discovered in Phocis and one of the few in Central Greece.

The ministry said the vaulted tomb is expected to provide important information on Amfissa during the Mycenaean period as well as on the historical development of the region, which includes the sanctuary of Delphi.