Transavia.com Invests Further In The GDS, Plans To Extend Reach In Greek Market 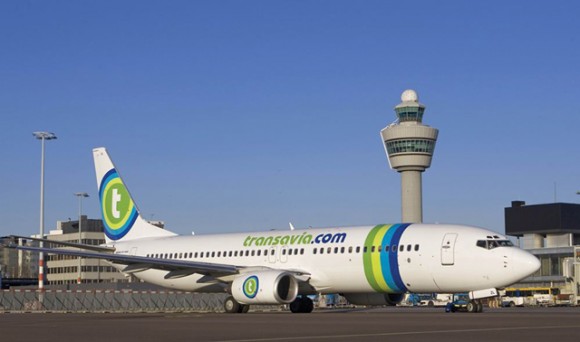 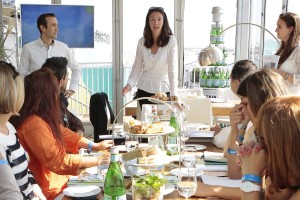 transavia.com’s VP of sales, Hester Bruijninckx, informs journalists from Greece, Italy and Portugal on the airline’s goals at a media briefing held during a VIP event at the Transavia Grand Slam Beach Volleyball, sponsored by transavia.com.

transavia.com, a Dutch low-cost carrier and member of Air France-KLM Group that provides scheduled services and charter flights to more than 160 destinations, has a strong mission to extend its reach in Europe and reach geographic markets where the brand is less well-established.

The markets where transavia.com intends to expand further include Greece, Portugal and Italy, journalists were informed by the carrier’s VP of sales, Hester Bruijninckx, during a media event held recently in the Netherlands.

A key partner in transavia’s mission is Travelport, one of the leading distribution services for the global travel industry.

transavia.com made its GDS debut with Travelport in 2012 and since then has extended its offering to include routes to multiple destinations in North Africa and Europe, including Greece.

Specifically for the Greek market, in March 2014 the cooperation was taken a step further to develop travel agency-focused initiatives aimed to make booking transavia.com through Travelport’s GDS a fast and efficient experience.

With the objective of creating awareness of the new content and making it an obvious choice to book, the initiatives include the production of training materials as well as a number of diverse communications and promotional activities. 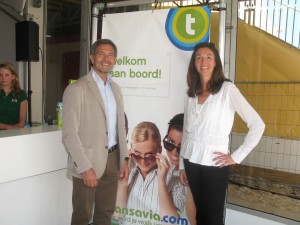 The new cooperation was launched following transavia.com’s implementation last year in the aggregated shopping component of the Travelport Merchandising Platform. This enabled their content to be shopped, compared and displayed alongside other carriers in a single screen.

Part of the platform is the “Rich Content and Branding” solution that transavia.com has also adopted. The solution is a step away from the traditional GDS mind set as it allows airlines to more effectively control how their flights and ancillaries are visually presented and described on travel agency screens, bringing them more in line with the airline’s own website experience.

“We allow low-cost carriers to sell the product the way they want to sell it, with the ancillaries and all the additional products that they want to put together, with a base fare,” Travelport’s VP and Managing Director for Western Europe, Damiano Sabatino, told GTP.

Low-cost carriers are companies that have always done business based on their website and, according to Mr. Sabatino, nothing in the GDS is so similar to a website than this.

“We are basically giving the low-cost carrier the opportunity of being sold by an interface that is very similar to their web interface and which has generated us success for the past years,” he added.

Extending reach in the Greek market

This year more than half a million seats from Greece are available to Dutch and French destinations against 282,000 in 2013. 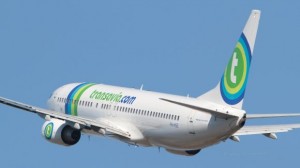 “In the Netherlands, transavia is a well-known brand but the Greek population may not necessarily know who transavia is, what we are offering and what we stand for… Our aim is to be more known in Greece,” transavia.com’s VP of sales, Ms. Bruijninckx, told GTP.

In total, this year transavia.com is operating over 2,000 flights to and from Greece.

In mid-April transavia.com opened a brand new direct route from Thessaloniki to Amsterdam.

“The flight is performing great. It is one of the flights that were full from the start and our load factor is very high (some 85 percent) and includes many Greeks flying to Amsterdam, which is something we very much like to see,” Ms. Bruijninckx said.

The airline also has scheduled flights from Athens to Amsterdam, Paris, Nantes and Lyon and the Dutch destination Eindhoven.

During summer season flights are also operated from many Greek islands including Corfu, Chania, Chios, Heraklion, Kefallonia, Santorini, Kos, Kalamata, Lesvos, Preveza, Rhodes, Samos and Zakynthos to the Netherlands. And from Chania, Heraklion, Mykonos, Rhodes and Santorini to France.

In addition, transavia.com offers connections to the KLM network for transfer traffic on KLM network.

Greece’s seasonality is an obstacle 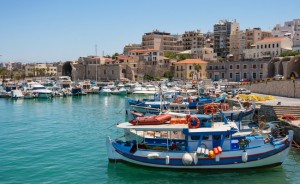 transavia.com believes that Rhodes and Crete are Greek destinations that could offer an extended season. “Especially Heraklio (photo), which is quite a popular destination in the summertime,” Ms. Bruijninckx said. Photo © Shutterstock

In regards to the possibility of transavia operating sustainable year round routes to other Greek destinations other than Athens and Thessaloniki, Ms. Bruijninckx told GTP that transavia.com is very interested but other destinations are not yet developed from a consumer perspective to offer enough volume for flights to run year round.

“It’s not so much that we want seasonal routes but more that the islands are ‘closed’ during the winter as the season ends… We would love to see an extension in the season and I think that this has been a topic for discussion for many years now in Greece,” she said.

According to data, the level of bookings for Greece this year shows an increasing trend to all destinations, including Athens. Since January 2014 transavia.com’s bookings to Greece have increased by 38 percent.

On an international level, transavia.com carries annually approximately 9.5 million passengers via a fleet of 45 Boeing 737 aircrafts.

transavia.com is represented in Greece by Galant Hellas.

The airline offers direct flights to main hubs in The Netherlands and France (Amsterdam & Paris) as well as regional airports (Rotterdam-The Hague, Eindhoven, Nantes, Lyon, Lille and Strasbourg); a pricing model based on affordable one way fares; and flexfares, allowing the passenger to make changes (passenger details, date, time and route) online at no charge, up to 2 hours before departure.