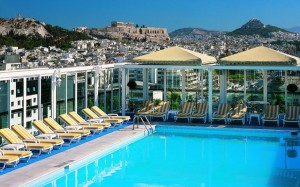 Hotel room occupancy in Athens, Greece, during the January-June period, increased from 55.2 percent last year to 68.3 percent this year, according to the Athens-Attica & Argosaronic Hotel Association.

The average room rate (ARR) during the first six months of the year was up by 4.9 percent compared to the same period in 2013.

In an announcement, the association referred to the data as “positive but not impressive.”

In June alone, the average occupancy in the Greek capital’s hotels “was not as satisfying as the upward trend recorded in the previous months” since it grew by 18.4 percent over 2013. The average room rate in June fluctuated within the price range of the semester, but June did in fact help improve the average increases in ARR of the six-month period.

“However we have a long way to go to fill the gaps and the losses of the previous years,” the city’s hotel association noted.

Doctor Available At The Acropolis Site In Athens

Report: Crete Attracts One In Five Visitors To Greece