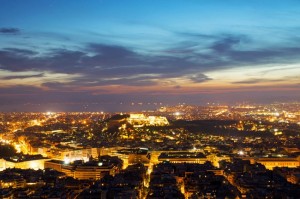 Hotel occupancy in Athens, Greece, last month rose by 19.9 percent, compared to last year, to 88.2 percent and reported the largest increase in Europe, according to data released recently by STR Global on the European hotel industry for June 2014.

Bucharest and Romania followed the Greek capital with an 11.3-percent increase to 74.5 percent.

RevPAR in Athens on the up

Geneva, Switzerland, fell 13.3 percent in RevPAR to 185.96 euros, reporting the largest decrease in that metric.

“As economies across Europe improve, we are starting to see the impact in the hotel industry,” said Elizabeth Winkle, managing director of STR Global.

However, Ms. Winkle added that concerns do exist, particularly in France, where the proposal of a new hotel tax is on the horizon. “With recent VAT increases on hotel stays, the new tax, if passed, could have a damaging impact on hotels performance and profitability,” she added.

Tourism’s Contribution To Greek Economy To Be Researched