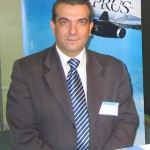 George Antonaros was recently appointed as the new general manager of Top Kinisis Hellas, one of the most prominent tourism organizations in Cyprus.

Top Kinisis Hellas was recently appointed as the exclusive General Sales Agent (GSA) of Cyprus Airways in Greece to market the airline’s routes.

The company also has the exclusive representation of Disneyland Paris and MSC Cruises in Greece and Cyprus.

MSC Cruises this year has launched a weekly cruise program on the luxury cruise ship MSC FANTASIA from Piraeus Port.