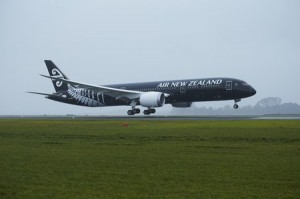 More than 50 Air New Zealand staff performed a rousing haka to welcome the aircraft, the first to be painted in the airline’s distinctive new-look black livery, to Air New Zealand’s Technical Operations base.

Chief Flight Operations and Safety Officer, Captain David Morgan, was on deck for the delivery flight and said it was a proud moment to see the aircraft, displaying the Koru and New Zealand fern touch down at its new Auckland hub.

“Being on the flight deck on the delivery flight of this magnificent 787-9 aircraft to Air New Zealand has been a career highlight. Like the Boeing 747-400 in the 1980s this aircraft really is a game changer for the airline and our customers,” Captain Morgan said.

The aircraft landed in Auckland following a week of celebrations in Seattle to mark the official handover by Boeing to Air New Zealand.

This aircraft, with the tail registration ZK-NZE, is the first of 10 787-9 Dreamliners to join Air New Zealand’s fleet. The aircraft will operate its first scheduled commercial route between Auckland and Perth in October, followed by services to Shanghai and Tokyo later this year.

Discover the World Greece is the general sales agent (GSA) of Air New Zealand in Greece.

2014 Is A Year Of Growth For Mideast Travel In Greece