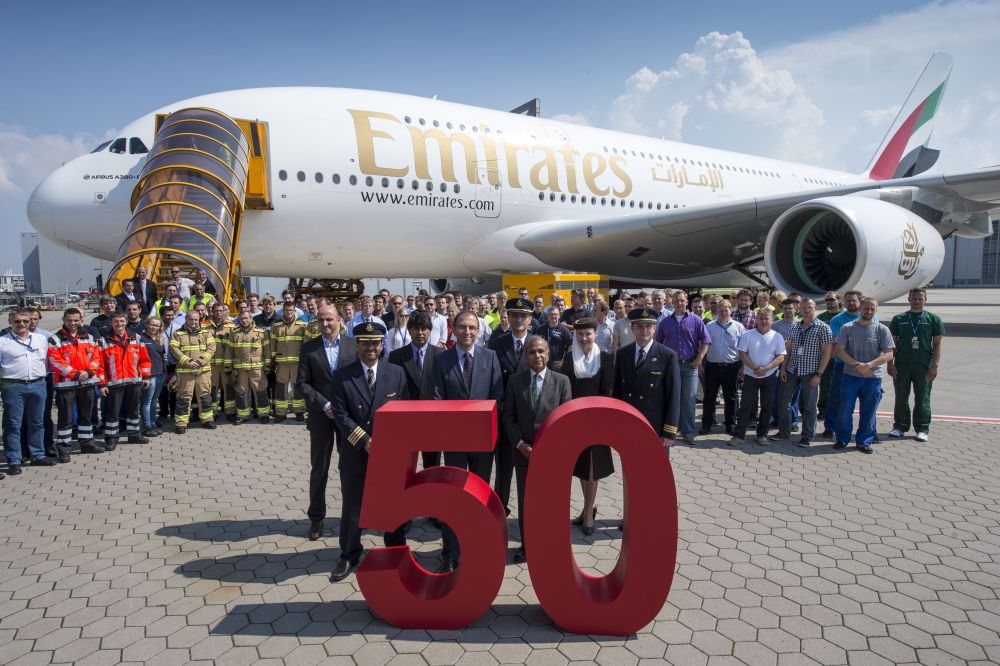 Emirates and Airbus employees gather in front of the 50th A380 to celebrate this milestone delivery. Photo © Emirates 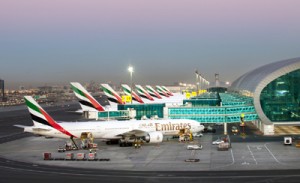 Emirates’ now has a wide-body fleet of 224 aircraft. Photo © Emirates

After the entry of its 50th A380 aircraft into service by early August, Emirates will offer on a weekly basis a total of 5.7 billion available seat kilometers (ASKMs) to 145 destinations which span the globe from Los Angeles to Auckland. Since April 2010, Emirates has received 96 aircraft (all A380s and Boeing 777s), increasing its overall capacity by 64 percent in ATKMs and 71 percent in ASKMs, while consistently maintaining seat load factors of close to 80%. During this period, Emirates also added 48 cities to its global destination network.

Emirates has the biggest A380 route network of any commercial airline, currently serving 27 airports on 5 continents. Its Dubai-Los Angeles route is the world’s longest A380 flight in operation. By the end of this year, the number of destinations served by an Emirates A380 will increase to 33, with the addition of Kuwait on 16 July, Mumbai on 21 July, Frankfurt from 1 September, Dallas from 1 October, San Francisco from 1 December and Houston from 3 December.

Emirates has 299 wide-body aircraft on its order book, including 90 more A380s, creating and sustaining thousands of jobs across the aircraft manufacturing supply chain. Many of these new jets have been earmarked to replace the older aircraft in Emirates’ current fleet. 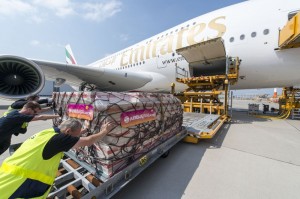 Modern, efficient aircraft have always been central to Emirates’ business model. The average age of Emirates’ fleet is 74 months, compared to the industry average of 140 months.

On the ferry flight for Emirates’ 50th A380 (right photo), the Airbus Foundation and Action For Hunger sent 41 tonnes of cargo consisting of Plumpy Nut food bars to support several existing nutrition programs in the region, mainly in Yemen. The peanut based food bars will be used to feed children five and under, suffering from acute malnutrition. The cargo will be stored in the United Nation Humanitarian Response facility in Dubai. This will be the single largest humanitarian cargo shipment in the history of Airbus.