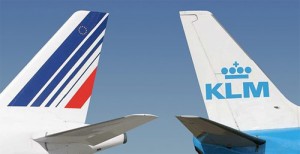 Air France-KLM has revised its earnings target for 2014 due to overcapacity and weak cargo demand, the airline recently said in its monthly traffic report.

According to the report, Air France-KLM said it was revising its EBITDA (earnings before tax, depreciation and amortization) target for the full year between 2.2 billion and 2.3 billion euros, rather than 2.5 billion euros previously forecasted. However, the revised forecast is still 20 percent more when compared with 2013 results.

The group noted that the released June traffic figures, as well as bookings for July and August, reflected the overcapacity on certain long-haul routes, notably North America and Asia, with the attendant impact on yields.

“This comes on top of the persistently weak cargo demand and the challenging situation in Venezuela identified in the First Quarter,” the airline group said.

According to reports, Air France KLM is one of a number of airlines whose revenues remain blocked in Caracas because of a currency-related dispute. The airline is said to be owed some $290 million as a result of the dispute.

Etihad To Launch Six New Routes In First Half Of 2015