For seven days, a series of events including music, children’s theater and cinema will be staged at the outside area of the the National Archaeological Museum in Athens.

The events will be held in collaboration with the City of Athens Culture, Sport & Youth Organization to promote the area as a point of reference and culture to Athenians and visitors. 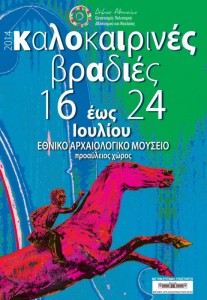 The rich program of events will kick off on Wednesday 16 July with the “Musical movie moments” program of the Municipality of Athens Wind Instrument Philharmonic Orchestra.

On Thursday 17 July, the Greek Music Workshop of the municipality will perform “Creations by Greek composers” and on Friday 18 July, an interactive show with live music for children aged 3 to 9 years named “The magic attic” will take place.

Next, on Monday 21 July, the children’s play “Don Quixote” is scheduled followed by the screening of the movie “Suddenly last summer” on Tuesday 22 July.

On Wednesday 23 July, Athenians and visitors are invited to a swing night with the Athens Big Band.

The seven-day arts fest will wrap up on Thursday 24 July with the shadow theater performance “Karagiozi Castaway and the Antikythera Shipwreck.”

Free entrance to all events, which begin at 9pm.