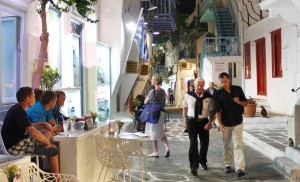 Τhe Development Ministry has announced the Greek tourism hotspots where shops will be allowed to open on Sundays.

The Central Union of Greek Chambers (KEEE) will be responsible for monitoring the pilot measure.

According to reports, shops located in the following areas are allowed to open on Sundays, seven days a week, regardless of their size: the historic centers of Athens and Thessaloniki, the areas of Pikermi and Rafina (Attica), Halkidiki, Rhodes, Kos, Syros, Mykonos and Santorini.

The issue of shops opening on Sunday in Greece will be reassessed in spring 2015. Reports mentioned that the full liberalization of opening hours of shops on Sundays throughout the country may be considered.

By 7 October 2014, the Greek Development Ministry is expected to have issued a ministerial decision, announcing a code of conduct for the protection of consumers during sales seasons.

Agritourism To Be Included In New Greek Tourism Bill