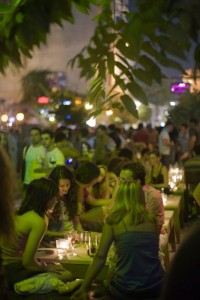 Foreign visitors leave some 100 million euros in tips every year to employees working in Greek hotels, restaurants and other services in the tourism sector, according to a new survey carried out by the travel website Tripadvisor, which found Americans more inclined to tip workers, even when service was below par.

More than half of all foreign visitors tip on their holidays to Greece, leaving an average of 10 euros each, according to the survey, which questioned a sample of 25,000 tourists.

Virtually all of the American visitors questioned (97 percent) said they left tips in restaurants or tavernas, with 81 percent saying they tipped taxi drivers and 79 percent giving an extra something to the hotel porter. Seventy-one percent said they tipped bar workers, 73 percent room service waiters and 69 percent cleaning staff. Employees at hotel gyms or swimming pools were unlucky as only 2 percent and 9 percent of US tourists said they tipped for those services. A third of American respondents also said they tipped even when service was lousy out of a sense of obligation.