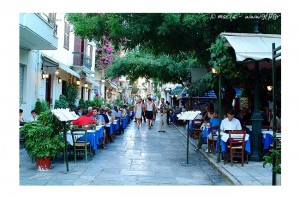 The Association of Greek Tourism Enterprises (SETE) recently said that the country’s domestic tourism market seems to be recovering for the first time in five years.

Recent data released by the Civil Aviation Authority seems to confirm this as during the first four months of the year, arrivals via domestic flights operating at Greek airports increased by 9.7 percent, reaching 1.4 million compared with 1.3 million in 2013.

Also, according to a study on the travel tendencies in Europe, conducted by MasterCard and Euromonitor International, 72 percent of the Greeks plan to vacation in a destination of their own country this year.

The positive expectations for Greece’s domestic tourism progress this year have been contradicted by the annual nationwide survey of the General Consumer Federation of Greece (INKA).

INKA contacted 791 consumers via telephone interviews during 2-16 June and came to the conclusion that 75 percent of Greeks will skip their summer vacation this year and stay home.

However, those who will take a vacation this summer will only stay away for four to five days, the survey revealed.