Her Majesty Queen Elizabeth II on 23 June formally opened the new home of Star Alliance at London’s Heathrow Airport, unveiling a plaque that names the facility “Terminal 2: the Queen’s Terminal,” in recognition of her long association with the airport. 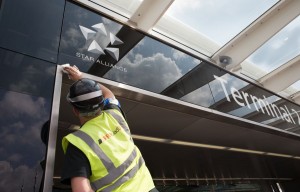 Britain’s Queen, who last year celebrated the 60th anniversary of her coronation, also opened the former Terminal 2 building that once occupied the same site as the new purpose-built facility back in 1955. The new Terminal 2 started its operations smoothly earlier this month.

This latest addition to Heathrow airport will house all 23 Star Alliance member airlines that serve the UK’s only hub airport. So far, United, Air Canada, Air China and ANA have successfully commenced operations there and the remaining airlines will move in gradually by November. This schedule ensures each move is as smooth as possible for passengers.

Greece’s Aegean Airlines will commence operations at Terminal 2 on 23 July 2014.

The 23 Star Alliance member airlines serving Heathrow represent over 20 percent of the airport’s traffic. It is the first time all Star Alliance carriers will be in a single Heathrow terminal, creating a superior travel experience for passengers, new business opportunities for the member airlines and providing an improved working environment for employees.

The completion of “Terminal 2: the Queen’s Terminal” is the culmination of an £11bn private investment program.