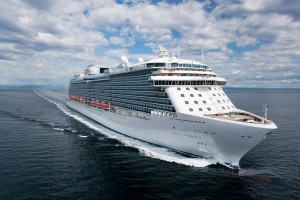 On Monday 23 June, the port of Piraeus welcomed the Regal Princess, one of the largest cruise ships in the world.

The Regal Princess is a royal class cruise ship operated by Princess Cruises.

During a ceremony held on board the Regal Princess, Captain Edward Perrin spoke highly of Greece as a cruise hub and expressed his satisfaction in regards to the high quality services offered by Piraeus Port.

According to the Piraeus Port Authority (PPA), the cruise ship industry plays a central role for the port, which welcomes some two million passengers per year.

The ship offers its 3,560 passengers a variety of enticing features, including a soaring atrium, the social hub of the ship; a dramatic over-water SeaWalk, a top-deck glass-bottomed walkway extending more than 28 feet beyond the edge of the vessel; plush private poolside cabanas; the Princess Live! television studio; a dedicated pastry shop; a special Chef’s Table Lumiere, a private dining experience that surrounds diners in a curtain of light; and balconies on all outside staterooms.

Throughout summer 2014, the Regal Princess will sail on Princess’ signature Grand Mediterranean cruises, with two itinerary choices. In October the ship will make her first transatlantic voyage to the Eastern Caribbean.

The exclusive representative of Princess Cruises in Greece is Amphitrion Group Companies.