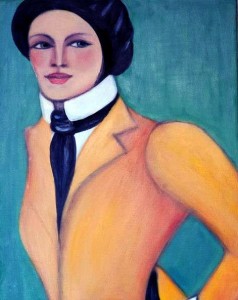 Sofitel Athens Airport is hosting an art exhibition with works of the Late period, created by French artist Catherine Canellis, until the end of June.

The collection Les Parisiennes, oil on canvas, are portraits of women of the Les Années Folles period, the “mad years,” an era of great creativity, joy and energy that followed the First World War.

“The collection Les Parisiennes, hosted in the public areas of our hotel, will offer our guests an extra journey, a journey in time to the decade of defying the conventional, the decade of French surrealism and the birth of popular culture,” said Cyril Manguso, general manager of Sofitel Athens Airport. 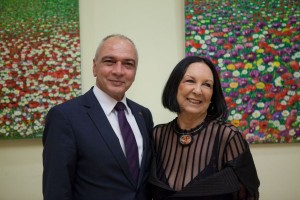 French artist Catherine Canellis with Sofitel’s director of sales and marketing, Yiorgos Stavrou, at a cocktail party held in her honor at the hotel. Photo © Sofitel Athens Airport

Born in Athens, from an early age she moved to Paris where she lives and works today. Although her artistic career had a slow start, she quickly conquered the art world with works that have been hosted in galleries across Europe starting from Brussels, Paris and Athens. She is a member of the Société des Artistes Indépendants, through which she participates in collective exhibitions held internationally (Brazil, USA, Middle East). In 2013 she was honored with the Toile d’or de l’année award at the Grand Palais in Paris for her work Delos en Fleurs.