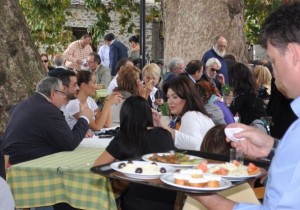 Greece aims to turn its healthy, Mediterranean-based, diet into an international trend to attract more tourist arrivals, Greek Tourism Minister Olga Kefalogianni informed professionals on 11 June during the inauguration of the Greek food products exhibition by Lidl Hellas in Athens.

During her speech, the Greek tourism minister referred to the need for Greece to produce and promote its quality products and underlined that agritourism is key for the country’s tourism product to become more competitive.

“Tourism, the primary agricultural sector, exports and overall the Greek economy, will benefit from the joint actions of all ministries and the launch of initiatives centered on the promotion of Greek products,” she said.

Mrs. Kefalogianni added that the Greek Tourism Ministry aims for prospective tourists to choose Greece for their holiday, not only for its beauty but also for its unique products.

“Our goal is for the Greek diet to not only become an important health habit, but an international trend,” she said.

The Greek tourism minister informed that the strategic action plan for the promotion of Greek tourism is based on the development and promotion of specific forms. “This plan led Greek tourism to record numbers last year and lays the groundwork for a similar course this year and also for the years to come,” she concluded.

The Greek food products exhibition by Lidl Hellas will take place at the Intercontinental Hotel in Athens until 13 June.