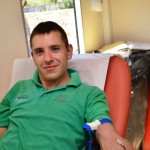 The Creta Maris Beach Resort on Crete recently carried out its annual blood donation drive, which was supported by the hotel’s management and staff. The donation was held under the auspices of Venizelio Pananeio-General Hospital of Heraklion.

“The donation is a significant social contribution, which is very important for the family of Creta Maris, as shown by the immense participation of the hotel’s employees,” an announcement by the resort read. There were a total of 40 participants this year. 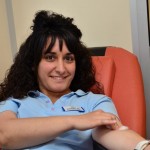 The Blood Donation program began in 1992 when the management team of the hotel noted the lack of blood in hospitals especially during the summer months and called on staff for voluntary donations. The strong response of staff resulted to the annual establishment of the blood donation program and the creation of a Blood Bank in Venizelio Hospital of Heraklion. This serves dozens of surgeries and serious incidents, which hotel employees and first grade relatives also have access to when needed.

Participants also had the chance to donate bone marrow to help a person in need.

Creta Maris Beach Resort belongs to Metaxas Group of Companies and has been operating since 1975.