No “Ski Week” Holiday For Greek Schools In 2015 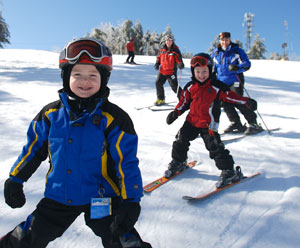 The Hellenic Federation of Hoteliers’ proposal for the establishment of a new annual school holiday period in Greece, so families could take a vacation during the winter, will not launch in 2015 after all.

The federation’s proposal for a “Ski Week” four-day vacation period for schools had been backed by the Tourism Ministry and was originally considered to launch in March. The plan was then put on ice temporarily as issues were to be resolved with other ministries.

However, according to reports, the new four-day vacation period is not mentioned anywhere in the plan for the 2014-2015 school year for the country’s schools. The plan is currently being processed by the Education Ministry and should be announced in a few days.

“Ski Week” is a mid-winter break established in countries of central and northern Europe held during the ski season, which gives parents the chance to take a winter vacation with the kids and at the same time support winter resorts. (In other countries around the world the vacation is also known as “White Week.”)

The Greek hoteliers had hoped to establish a “Ski Week” in Greece to boost domestic tourism.