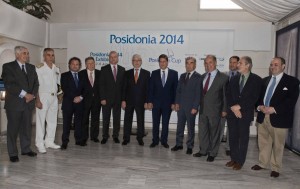 The Posidonia 2014 shipping exhibition, which will take place 2-6 June at the Athens Metropolitan Expo, is expected to be the biggest in the event’s long history, organizers said at a press conference held on 29 May. The organizers confirmed new records in terms of participant countries and exhibition size compared to the 2012 event.

More than 1.800 exhibitors and some 19,000 visitors from a record 93 countries and territories will attend Posidonia 2014.

According to the organizers, Posidonia’s international appeal is reinforced by the fact that it is the national maritime exhibition of the Greek shipping community, which dominates global shipping with their ever expanding fleet currently standing at 3,669 ocean going vessels over 1,000 gt.

And with the Greek fleet’s ongoing expansion and modernization strategy, shipping service and product providers from all sectors of the industry are expected at Posidonia to meet with Greek shipowners who last year spent $13 billion under their newbuilding program, investing in more than 300 newbuildings. 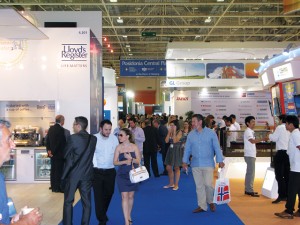 The traditional shipbuilding powers of the Far East will field this June their biggest ever contingent of ship yards at any Posidonia show.

The shipping exhibition will welcome every direct or indirect provider in the shipping supply chain including marine service providers, makers of electronics and software, lubes and equipment suppliers, manufacturers of engines, bunkers and flag registries.

This year companies from the Gulf Cooperation Council (GCC) have registered a 200 percent increase with a large number of companies from the United Arab Emirates, Saudi Arabia, Qatar and Oman seeking investment and partnership opportunities in Greek shipping assets.

Once again, the biggest national participation belongs to China, followed by Korea and Japan while this year Hong Kong is making a long-awaited comeback after a 10-year absence, with Turkey returning after 2006 and Georgia in its maiden appearance.

Posidonia has also unveiled details of its robust Conference & Seminars Program that will deal with some of the most popular and controversial issues pertaining to the global shipping industry.

Posidonia 2014 will also mark the launching of HEMEXPO (Hellenic Marine Equipment Manufacturers Association), which will promote Greek equipment manufacturers to shipyards around the world and its first goal is to include Greek manufacturers on the “Maker List” of Korean shipyards.

Posidonia 2014 will be opened by Greek Prime Minister Antonis Samaras on 2 June, before it officially opens to the public a few hours later.

Shipping accounts for seven percent of Greece’s GDP, provides employment to 192,000 people and contributes to the local tourism industry by generating some 50 million euros for the community every other year.