Greek tourism professionals recently pointed out that investments for high class hotels must be made in Greece for the country to keep pace with expected growth.

According to figures presented by the Association of Greek Tourism Enterprises (SETE), tourist traffic in Greece will increase in June and reach its peak in July and August. In particular, SETE said that scheduled flights to Greek regional airports from abroad were up by 25 percent compared to 2013.

SETE’s president, Andreas Andreadis, said that the new estimated figure was originally the association’s set target for the next four years.

Future demand for hotel beds must be met

According to SETE, the absence of top-category hotels in Greece that meet the requirements and expectations set by tour operators and travel agencies (who sell most holidays to Greece) is the reason that tourists eventually prefer other destinations that are more competitive in terms of hotel infrastructure. 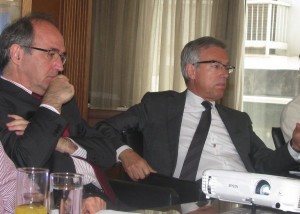 SETE said that by 2021 Greece would need 150,000 beds in new four- or five-star hotels and an additional 100,000 beds in upgraded units to satisfy the future demand for beds. For these investments to take place, investment programs of 24 billion euros will be needed (21 billion from the private sector and three billion from the Greek state).

Projects for the creation of new resorts and the upgrade of existing hotels have launched in Greece, but their completion (that would lead to an increase in beds) is not expected for another two or three years.

“This year’s rising demand should alert the state to accelerate investment in the hotel industry,” SETE’s president, Andreas Andreadis, said.

Mr. Andreadis underlined that Greece could speed up on its tourism investments if licensing procedures are simplified, NSRF funds are absorbed properly and if bank lending is reactivated.

However, despite the delays in licensing procedures, Greece remains a preferred destination for investment by foreign and domestic groups. According to the Tourism Ministry, there is currently an interest for investments – mainly for the creation of tourist accommodation complexes – that add up to some five billion euros.

Another “Big, Fat Greek Wedding” To Hit The Big Screen

No “Ski Week” Holiday For Greek Schools In 2015