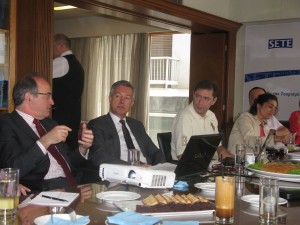 The Association of Greek Tourism Enterprises (SETE) has for the third time since December revised its 2014 arrival forecast.

SETE had initially expected tourist numbers to hit the 18 million mark this year, but revised this upwards in February to 18.5 million arrivals.

Today, 28 May, SETE’s president, Andreas Andreadis, informed journalists that the goal for 2014 is to welcome 19 million tourists in the country.

Citing processed data by SETE Intelligence, the association’s research department, Mr. Andreadis said that scheduled flights to Greek regional airports from abroad were up by 25 percent compared to 2013. Scheduled flights to Athens for this season are up 23 percent.

The data also showed that scheduled flights to Greece this season have increased in comparison to charter flights to the country. “This is a very positive development as it creates a balance in the distribution networks, and hence in demand,” Mr. Andreadis said.

He also informed that arrivals from Russia this year are expected to move on the same pace as in 2013 (some 1.3 million). The association originally expected 1.5 million Russian tourists to visit Greece this season.