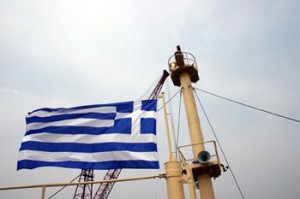 Greek shipping can further contribute to the country’s economy provided a stable and competitive institutional framework is maintained, according to the recently released annual report of the Union of Greek Shipowners. The report highlighted that the crisis of the Greek economy is approaching its end and that structural measures of the past two years are beginning to show results.

According to the report, the Hellenic Register of Shipping counted 802 vessels (capacity greater than 1.000 gt) that amounted to 41.829.594 gt. last year, while Greek-owned shipping remained in first place worldwide on a capacity level, with 3,669 ships, larger than 1.000 gt.

“Despite the ongoing global economic crisis , the revenue from the provision of maritime services in foreign currency in Greece, amounted to 12,089.90 million euros, compared with 13.287 million in 2012, while shipping provided employment, directly or indirectly, to 192,000 people on ships and land,” the report said.

In regards to the Greek economy, the report showed that the primary surplus achieved in 2013 will give rise to new developments in 2014 regarding the Greek public debt, which now stands at 172 percent of the Gross Domestic Product (GDP). “Greece, in each case, will see some of its debt lightened,” the report noted.

Also, the report underlined that Greece and the European Commission are certain that, after five years of deep recession, the Greek economy will grow at a moderate rate of 0.6 percent in 2014 and return to more robust growth as of 2015.