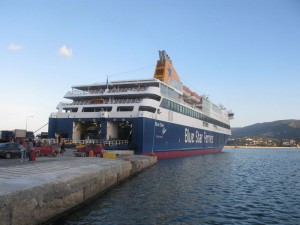 The recent strategic cooperation deal between Piraeus Bank and Marfin Investment Group (MIG) is expected to lead to significant developments in the Greek coastal shipping sector.

The deal sees the Greek bank taking over a 17.7 percent share in MIG through convertible bonds and becoming its largest stakeholder.

Media reports suggest that the deal will pave the way for large-scale restructurings in companies in which MIG has holdings. These enterprises are in the sectors of food, health, information technology and coastal shipping.

In the field of coastal shipping, MIG controls 89 percent of the Attica Group (Blue Star Ferries and Superfast).

Industry specialists expect Piraeus Bank to now play an influential in the future developments of Greek coastal shipping as it owns a majority stake (38 percent) in Hellenic Seaways, in which the Italian Grimaldi Group – that controls Minoan Lines – owns 33.34 percent of the share capital.

Piraeus is also the biggest creditor of NEL Lines and ANEK Lines. The latter has loan obligations with the bank that amount to 400 million euros.

Various scenarios have already begun to circulate through the market in regards to restructures in the coastal shipping sector in Greece.

One scenario says that Hellenic Seaways will be divided into two units; one to run NEL Lines and the other to control ferry operator Minoan Lines.

A second scenario expects ANEK to be bought out by Attica, owned by MIG. The two ferry companies already have a cooperation on ferry routes to Crete and the Adriatic (Piraeus-Heraklion and Heraklion-Igoumenitsa).