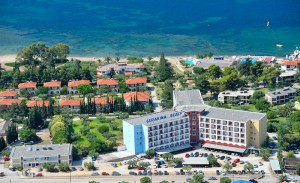 A second hotel has been added to the portfolio of the new luxury resort group created by the cooperation of Oaktree Capital Management and Greek group Sani SA.

According to reports, the luxury resort group has acquired the Gerakina Beach in Halkidiki for some 17 million euros from its previous owner, the National Bank of Greece.

The hotel has been closed since 2012 and had already come out in two tenders that were declared rough.

The three-star Gerakina Beach is located in Poligiro in Halkidiki and has a capacity of 503 rooms with 955 beds. Plans include the upgrade of the hotel to a five-star unit, for which at least 10 million euros will be required.

Oaktree-Sani has not announced when renovation works will begin or when the hotel will open its doors to guests.

This is the second hotel added to the Oaktree-Sani luxury resort group. The seaside resort “Oceania Club” in Nea Moudania of Halkidiki that has a capacity of 660 beds, property of Sani SA, was the first hotel to be added.

In March 2013, Sani and Oaktree Capital Management embarked on a partnership for the creation of a new hotel group expected to provide Greece with a high quality tourism product. The total investment is expected to exceed 100 million euros.

The portfolio of the new group will consist of luxury resorts, each with a capacity of 500-600 beds, throughout Greece. Discussions have been initially made on existing units, starting in Halkidiki, but also in other parts of the country, mainly popular Greek destinations. According to the agreement, Oaktree retains the majority stake, while Sani also holds a share.

The new cooperation will be based on the expertise of the Greek hotel group in the operation of luxury resorts and Oaktree’s capabilities to support high scale investments.

The name of the group, while not yet finalized, is expected to be “Oceania.”

The Oaktree Capital Management is an American investment fund located in Los Angeles, California, which manages pension funds in the U.S. and Canada and invests where there is a prospect. It currently manages approximately $ 80 billion.