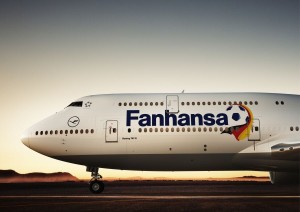 A total of eight aircraft in the Lufthansa fleet will swap their well-known lettering for the new “Fanhansa” logo, wanting to offer the best World Cup atmosphere and pure football fever this summer.

On 16 May, the first “Fanhansa Airbus” will take off from Munich to Hamburg and London. The first flight will be LH 2066 departing at 11:20 am from Terminal 2. This Airbus A321-200 will be followed by two additional short-haul aircraft and a total of five long-haul aircraft, including the Boeing 747-8, the world’s longest aircraft, which will feature the “Fanhansa” logo.

Lufthansa: Carrier of all football fans

With Fanhansa, Lufthansa will be flying not just the German national team to Brazil, as partner of the German Football Association, but also thousands of football fans, media representatives and officials. 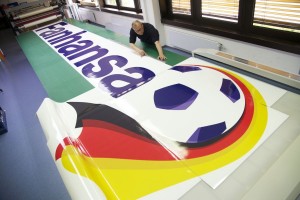 Preparing the logo at the workshop at Lufthansa Technik. Photo © Lufthansa

The airline announced that many surprise promotions will take place on board Lufthansa’s scheduled flights, at check-in counters and gates in German airports. In some promotions, participants will be able to qualify immediately for a ticket to Brazil on board a Fanhansa plane.

Fans of the latest Lufthansa experience can follow everything to do with Fanhansa online at LH.com in the next few weeks: the night in the Lufthansa Technik hangar in Munich and the application of the lettering, which will be up to 1.23 meters high; the first surprise flight; the departure of the German team at Frankfurt Airport and; the flight carrying all of the fans to Brazil in mid-June.

Nikki Beach Hotels & Resorts To Debut In Greece In Summer 2014