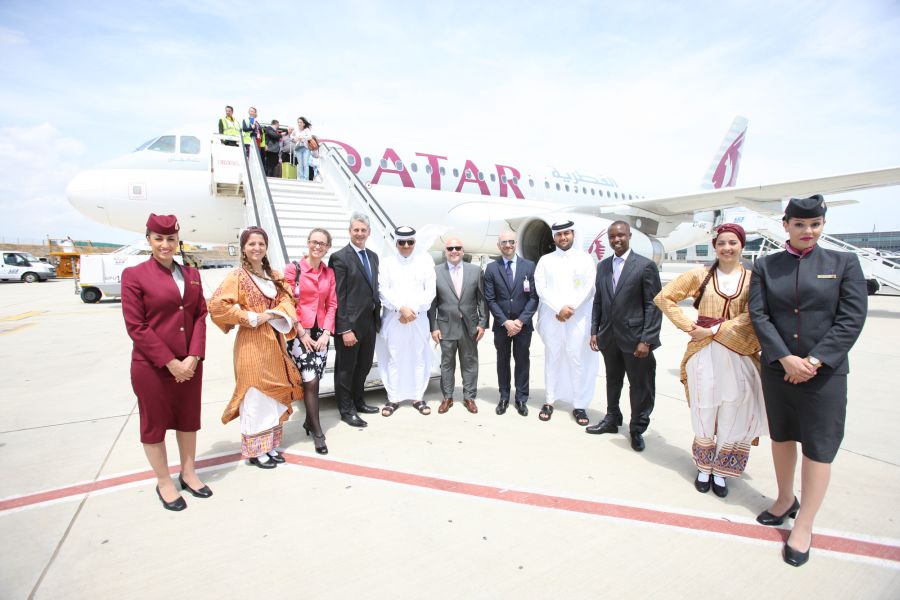 “Scheduled flights between Cyprus and Qatar have long been an aspiration for the airline and we believe travelers will truly appreciate our five-star service, together with the enhanced network of flights to more than 135 destinations around the world,” Marwan Koleilat (right), Qatar Airways Chief Commercial Officer, said. Photo © Qatar Airways

The inaugural flight signaled the start of a four-time weekly service to Larnaca that will be operated by an Airbus A320, with 12 seats in Business Class and 132 in Economy.

The new route is expected to become a popular choice for both business and leisure passengers, expanding bilateral relations between Cyprus and Qatar.

According to an announcement, the launch of the airline’s flights to Larnaca signals a strengthening connection between the two countries that opens up new opportunities for mutually beneficial relations, by promoting and expanding economic and trade relations.

Qatar Airways has recently taken advantage of their alliance network with the commencement of code shares with fellow oneworld member Cathay Pacific. The codeshare provide added benefits for passengers who already are able to take advantage of lounge access, increased connectivity and over 14,000 daily departures.

The Doha–Larnaca service, which runs four times a week, will operate on Tuesdays, Thursdays, Saturdays and Sundays. Flight QR265 will depart Doha at 8:10am and arrive at Larnaca at 12pm. The return flight QR266 departs Larnaca at 2:10pm and arrives at Doha at 5:45pm.