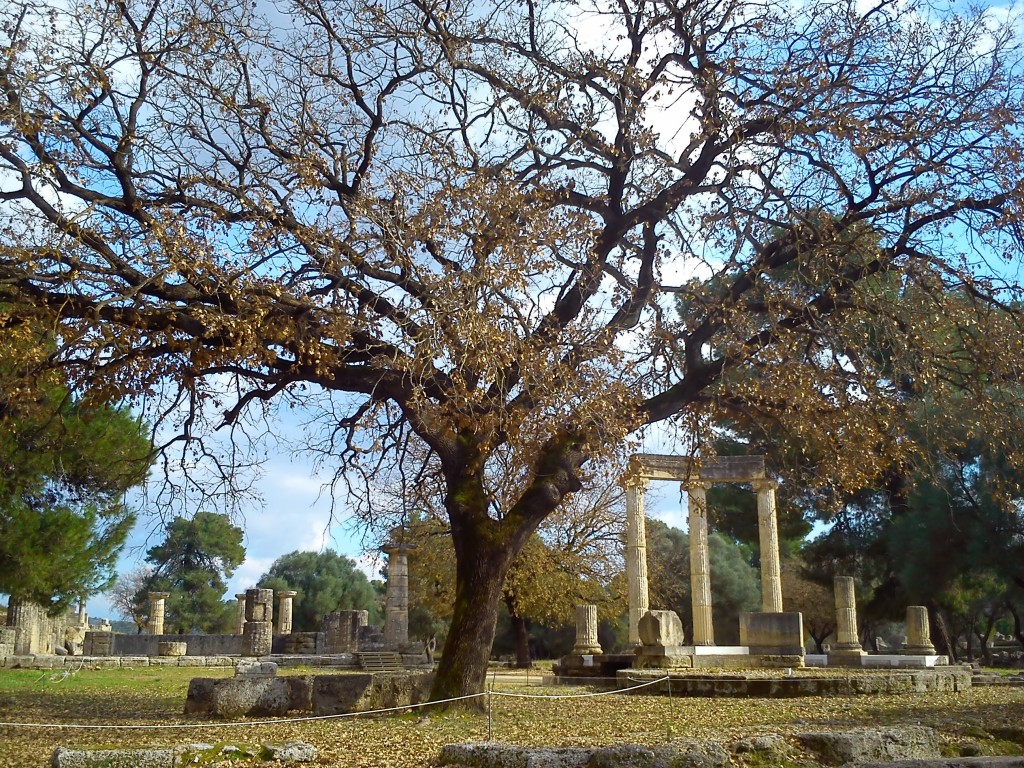 A memorial to the Macedonian royal dynasty, Philippeion was dedicated by Philip II, king of Macedon. The monument was completed by Alexander the Great after the assassination of his father in 336 BC. , © Constantinos Dougas

“Olympia, the sanctuary of Zeus and birthplace of the Olympic Games”

Olympia, the sanctuary of Zeus and birthplace of the Olympic Games, lies in a verdant valley of the western Peloponnese at the confluence of the rivers Alpheios and Kladeos. A landscape of great natural beauty, the whole valley was in ancient times thickly wooded and full of wild olive trees, from the leaves of which were made the wreaths that crowned the Olympian champions; hence the site was named Altis, meaning grove. It was also named Olympia after Mt Olympus, the abode of Zeus.

The beginnings of the sanctuary and its games are hazed in myths: Zeus prevailed in Olympia after dethroning his own father Cronus, who was worshiped upon the namesake hill to the north of the sanctuary. As to who was the founder of the games, several heroes claim the title; among them Hercules and Pelops, ancestor of the Homeric Agamemnon and mythical king of the Peloponnese (the very name of the peninsula meaning the island of Pelops). We reach the realm of history in 776 BC, the year of the first recorded athletic event that humanity nowadays celebrates as the Olympic Games. Their ancient name was Olympia and they were held every four years in honour of Zeus. The Olympiad, the four-year period between two successive celebrations, became the standard chronological system of the ancient Greek world.

The Olympics were the panhellenic top sporting event that embodied the ideal of fair competition among free and equal men, as conveyed in the words let the best win. There could be no greater honour for a youth of the time than to be crowned with the kotinos, the champion’s olive wreath, nor greater glory bestowed on the athlete’s bithplace: when back home, part of the city walls were pulled down for the champion to enter. Before the opening of the Games, the Sacred Truce was proclaimed, the treaty that imposed the suspension of wars and the cessation of all kinds of hostilities during the games. As an ideal of peace and reconciliation, the sacred truce lies at the heart of the Olympic values and is the most important legacy left by the ancient games to their modern successors.

The last Olympics of antiquity were held in AD 393, shortly before the emperor Theodosius I banned paganism and closed down the ancient sanctuaries. Then came successive earthquakes and river floods to bury the ancient ruins for centuries until the archaeological excavations brought them back to light in 1875. Twenty years later, in 1896, revived the first, and now international, Olympic Games of the modern era, held in the Panathenaic Stadium in Athens.

The archaeological site of Olympia, one of the largest in Greece, yielded a singularly rich concentration of monuments and works of art, such as the famous statues of Hermes by Praxiteles and Nike by Paeonius. Throughout antiquity, each century added its own structures, which gradually formed the complex topography of the sanctuary: the sacred precinct of Zeus, namely the temenos of Altis, enclosed the temples, votive offerings, and structures related to the religious activities. Outside the enclosure lay the athletic venues, the officials’ quarters, the guesthouses and baths for athletes and visitors alike.

The Theater of Epidaurus