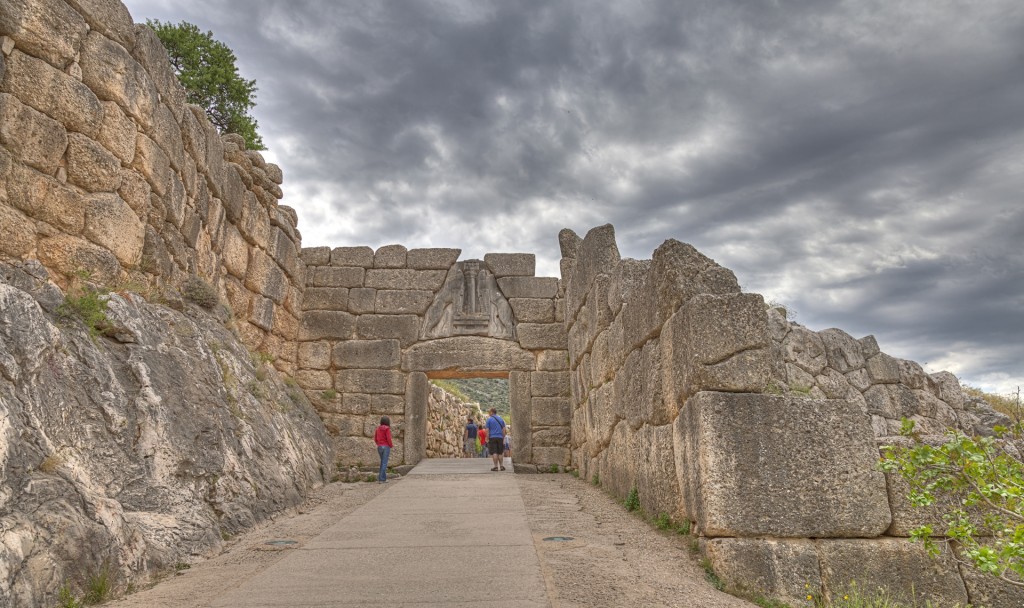 Mycenae, the legendary kingdom of the Atreides, is situated upon a small hill-top on the road leading from the Argolic Gulf to the north (Corinth, Athens, etc.). The site was inhabited since the Neolithic times (about 4000 BC) but reached its peak during the Late Bronze Age (1350-1200 BC), giving its name to a civilization which spread throughout the Greek world.

During that period, the acropolis was surrounded by massive “cyclopean walls”, built in three stages (ca.1350, 1250 and 1225 BC), with the exception of the SE flank where a steep ravine provided natural defense. A palace was built on the summit of the hill, while towards the Argolic plain lay the wall-painted “Cult Center”, the main gate or “Lion Gate” and the “Grave Circle A”, the burial ground of the Mycenaean royalty. On the NE side, a tunnel leading to a subterranean fountain was built in “cyclopean” masonry in around 1225 BC.

Outside the walls lay the residential area of Mycenae, as indicated by the number of private houses brought to light by the excavations. However the landscape here is dominated by the “Grave Circle B”, and the monumental tholos tombs, among them the ones attributed to the legendary royal family of Mycenae. The burial monuments of Mycenae also yielded the treasure of finds, now exhibited at the National Archaeological Museum and at the on site Museum of Mycenae.

Mycenae was occupied without interruption until 468 BC when it was conquered by the city of Argos and its population was banished. It was reoccupied in the 3rd century BC for a relatively short period. When the ancient writer Pausanias visited the place in the 2nd century AD, it had been deserted long ago.

In 1876 Heinrich Schliemann started the excavations which led him to the discovery of the Homeric Mycenae.

The Theater of Epidaurus