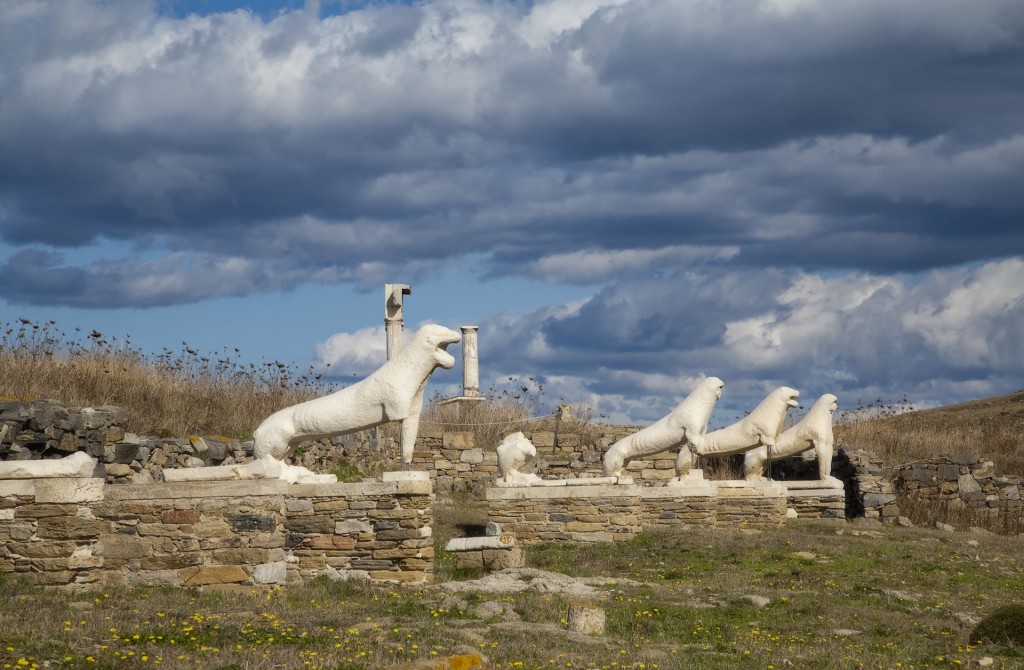 Delos was one the most important Panhellenic sanctuaries, and, according to mythology, the birth-place of Apollo and Artemis. The first evidence of habitation on the island dates from the 3rd millenium BC, and important remains of the Mycenaean period have been uncovered in the area of the sanctuary. In the 7th century BC Delos was already a known Ionic centre because of its religious importance as the birth-place of Apollo. Athenian influence was initiated on the sanctuary with the first purification of Delos by Peisistratos in 540 BC but it gradually developed into a proper domination lasting – with short intervals – until the end of the 4th century BC, when Delos was finally declared free and independent (314 BC). The independence of the island lasted until 166 BC when the Romans gave it over to the Athenians. The second Athenian domination started with the expulsion of the Delians to Achaia, in the Peloponnese. The declaration of Delos as an “international” harbour by the Romans led to an influx of foreigners who became a significant element of the island’s population. The absence of taxes resulted to the concentration of trade activity on the island and, subsequently, to its economic prosperity. The close relations of Delos with Rome, though, was the main reason for its decline. During Mithridates’ wars againts the Romans, Delos suffered severe damage in the raids of 88 and 69 BC. Since then, the island’s prosperity gradually came to an end. In the 2nd and 3rd centuries AD only a small settlement existed on Delos and, as Christianity had gradually replaced the ancient religion, the island finally lost its importance.

Delos, however, was a sacred place with splendid buildings and sanctuaries and as such, it was never forgotten; many references are preserved by travellers who visited the island in the last centuries. Numerous pieces of sculpture were transferred to museums of Greece and abroad, while marbles from the ancient buildings were used as building material by the inhabitants of the nearby islands. Excavations on Delos started in 1873 by the French School of Archaeology at Athens and by 1914 the most significant sections of the ancient site had been uncovered. The years 1958-1975 were also a period of intensive excavations, which continue up to date by the French School of Archaeology. Restricted excavations were also conducted by Greek archaeologists at the beginning of the 20th century. In 1990 Delos was included in the World’s Cultural Heritage Sites and Monuments, protected by the UNESCO.